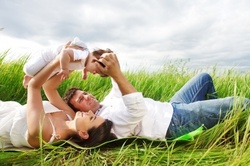 Autism Spectrum Disorder (ASD) is one of the most common neurodevelopmental disorders and is thought to be the result of a complex interaction between genetic and environmental factors. It is typically diagnosed at age 3-4 years and is characterized by severe abnormalities in communications, social awareness and skills, and the presence of repetitive and stereotyped patterns of behaviors. For the majority of cases there are no reliable biomarkers or known pathogenesis. Neuroimaging and electroencephalographic studies have found evidence suggesting that neuronal connectivity patterns are altered in ASD. The genetic background is heterogeneous and may include chromosomal aberrations, specific gene mutations and epigenetic defects. Autistic children can display immune system dysregulation. Oxidative stress also plays a role in the pathology of ASD.

According to the CDC 1:68 children in the USA will develop ASD. It is also highly prevalent in most regions of the world. According to Autism Speaks, a leading autism science and advocacy organization, autism costs society a staggering $126 billion per year (U.S.).

The treatments for autism presently available can be divided into behavioral, nutritional and medical approaches, although no defined standard approach exists.

Recent evidence has emerged that children with autism may have folate or methionine metabolism defects, which suggests the folate-methionine-glutathione cycles may play a key role in the etiology of autism in these children. The improvement that some children show when treated with an active metabolite of folate (folinic acid or 5-MTHF) is taken as evidence that disruption in folate transport to the brain is responsible for certain clinical manifestations in children with ASD.